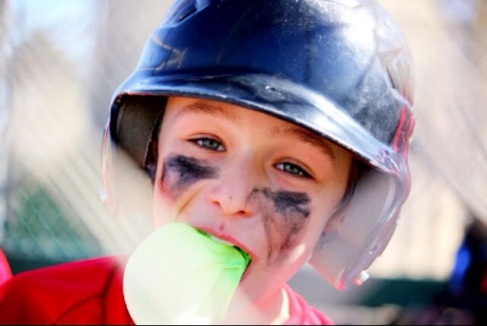 The San Francisco Little League held its annual spring season draft last night in Golden Gate Park.  Or rather, one of its drafts.  The League manages what I understand to be the second largest gaggle of young players in the country.  A gargantuan task, and all run by volunteers, with a huge impact on their own lives and of the lives of their families and partners, who shoulder more of the load at home while the administrators administrate, the player agents agent, and the coaches coach for several months each year.  So this is a big deal.

Our sons have both played in the League since they were in kindergarten.  And I have been fortunate enough to coach all of their seasons, sometimes two seasons in a year.  So that means I’ve managed to coach something on the order of 17 teams over 17 “seasons”.  Maybe something approaching a couple hundred girls and boys by this point.

I don’t think I could recite how many games any particular team won or lost, or what the scores were for any particular games, even playoff games for the older players when things tend to get considerably more competitive.  I would be lying if I said that I didn’t care about how well my teams and players and sons physically played their games.  Or that I have no interest in a game’s final outcome.  I have spent plenty of post-game car rides home solo, banishing myself (or being banished) to drive alone, so that I can curse with abandon, wrestle with the “what ifs” and “so and so,” and so on.  My “success rate” when measured against Carlin’s words on these rides is high, er, low, er, you know what I mean.  But the collateral damage is minimal, since there’s only me in the car to blush at my word choice and be disappointed that I have come to this, unraveled and disheveled along the Bay Bridge drive home.

If the scores, batting averages, playoff records, etc., were why I coached, were what mattered most, then I shouldn’t be a coach.  Period.  I would have no business coaching my kids, your kids, or anyone else’s kids.  I would be in it for the wrong reasons, and probably spreading my own wrong-headed contagion to every player, coach and parent with which I come in contact. That’s alot of infected people; it’d be a mini-epidemic.  No bueno.

I think about this alot, and especially with the start of each new season: The reason I coach is to try to help each player learn what it means to achieve something that seems unachievable to them.  To try to help each player discover inspiration within themselves.  To instill in each the notion that if you never quit, you can never “lose.”  To wake each player up to the simple, powerful pleasures of the smells of outfield grass in the sun, scuffed dirt in the infield, and a glove’s worn leather.  I think these things are important.  In fact, I’m not sure I know of things that are more important than these things.  As I sit thinking pretty deeply now about why I coach, it occurs to me that there’s a fair amount of Grandma’s Lemonade mixed throughout in this.

I throw my share of batting practice and a few thousand pitches over a season, sore throwing shoulder be-damned.  And I’ll teach the mechanics I think I know how to teach.  And I’ll call signs to our catcher intended to strike out the opposing batter, if I’m asked to handle the pitch-calling.  And I’ll attempt to position an outfielder or two a step or two here or a step or two there to maximize the opposing team’s batter’s chance of failure.  And I’ll send a player of mine on a lap around the park, with a serious look on my face, for any number of transgressions.

But more importantly, I am earnestly searching the actions and behavior of every player on my team, during every practice, and every game.  I’m looking for an opening.

The 10th strikeout in a row by one of our hitters, shoulders slumped and face on the verge of tears trudging defeated towards the dugout.  The most diminutive player on our team, suddenly thrust into the spotlight and onto the pitcher’s mound, asked to somehow throw the ball into that tiny catcher’s mitt so far away, without hitting the boy standing with a bat and without having the boy standing there with a bat hit the thrown ball.

The least skilled player, in his last at-bat of the season, having experienced so little “success” during the long season — then his unbridled joy at hitting a chalkline-sniping grounder past the surprised first basemen, scoring all of our base runners and winning the game.  Suddenly.  Unexpectedly.

The player struggling to focus on the pitcher from the batter’s box, distracted by the well-intentioned but completely counterproductive stream of “encouragement” from his father standing 10 feet behind him.

These are the moments I seize upon, grateful to the sport that delivers them up to me.  So many eye-to-eye (often requiring a bent knee on my part) and heart-to-heart discussions, albeit brief.

“Hey, you just did something amazing, and I bet you didn’t think you were capable of that, right?”

“You may strike out 10 more times in a row.  But if you run back to the dugout with your head up, if you get your head right back into the game and cheer on the next guy, that ability to ‘get right back up’ is way more important than anything you can do with a bat in your hand.”

“No matter how many times the pitcher pitches the ball over your head, halfway to the plate, or even closer to the dugout than to your catcher’s mitt, you need to stay positive, not betray your frustration in your body language, because your actions are having a huge effect on him.  And how the rest of your teammates will treat him.  I don’t care if he is the weakest player on the team and if his pitching right now means that we might lose the game.  He will remember this moment for the rest of his life, so think about how you want him to remember it and to remember you.”

Gives me chills to recall these moments.  And I’m completely OK with the fact that most of these comments delivered from the third base coaches box or hovering somewhere near our dugout might skip off into the stratosphere.  If only a couple sermons stick, or maybe come back to mind years from now when some sticky situation presents itself, it’ll all have been worthwhile.

I don’t remember much at all about the statistics and records from my own piddling baseball career.  But I do remember how my own coaches taught me important things along the way; lessons that I would not absorb or appreciate until I was older.  I am pretty damn lucky to be able to share some of these same things, with a healthy mix of my own ideas, to so many boys and girls wearing the same team’s ball cap as the one on my head. I can’t wait for the new season to begin.