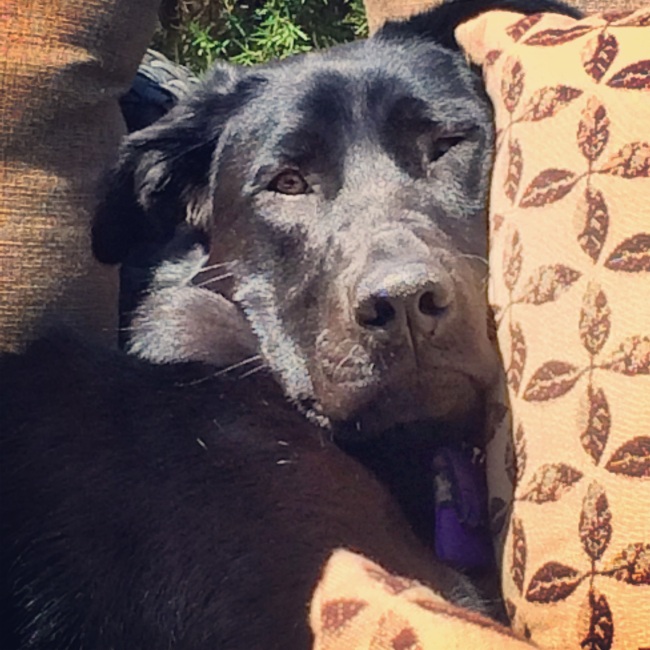 The latest entry in the Godzilla franchise is evidently set in San Francisco.  I know this because I’ve seen the ad campaigns illuminated in MUNI shelters and plastered on the sides of buildings near the Bay Bridge on ramps.

Actually, I know this because our 8 year-old, Everett, has himself convinced that he is qualified to sit in the theater audience when the film premiers here in a week or so. He has deployed practically every manipulative technique in his growing arsenal  in a desperate bid to bend his parents’ will to his own regarding this issue.

For example, he has trotted out the tool of attempting to demonstrate maturity beyond his years in a casual manner, such that no parent in their right mind would think this 8 year-old has no business watching Godzilla lay siege to the 8 year-old’s city:  From his backseat throne the other day, Everett pronounced that Godzilla could not possibly have been filmed here in San Francisco.  The prehistoric creature is far too large, you see.  Had the beast trampled and scorched our fair city as the movie posters depict, Everett observed coolly, we surely would have seen this happen with our own eyes.  Hence, the movie was not filmed in San Francisco.

The subtext here, the one that took me a couple days to figure out, is that Everett is attempting subtly to indicate his own precocious ability to distinguish fact from fiction.  He is mature enough to appreciate the film is fake — this is the logical conclusion to which he is attempting to lead his parents.  The violence is computer-generated.  It’s all just good entertainment.  Not something that will trigger sweaty nightmares, a long-lasting fear of buildings toppling in the Financial District, or a phobia associated with the newts and salamanders that frequent the trails we hike.  There is but one logical conclusion here, right?

Here’s the problem:  The film is rated PG-13.  Everett is rated 8.  He can absolutely watch the film, we’ve informed him.  In 5 years. Maybe fewer for good behavior.  Maybe.

I mention Godzilla because our dog Wailea achieved a Godzillian feat yesterday.  She ate our Walkathon.  Or rather, our kids’ school’s Walkathon.

This annual event is a magical piece of Americana that our family has enjoyed for the past 8 years now. Our boys and their schoolmates run, walk or skip as many laps around the Lower School Soccer Field as they can manage in one hour.  The proceeds help cover tuition for families that need a little help and contribute to a service organization of the students’ choosing.

It’s not a scientific affair.  Marker-wielding parent volunteers slash a quick black stripe on the child’s shirt for each lap as the child runs past a fixed position on the field.  The parent and child occasionally run in tandem for a moment like sprinters exchanging a baton.  It is important, albeit difficult in practice, to make a legible mark that can be distinguished from the others.  Black slashes are tallied up at the end.

Friends and family who have knowingly or unknowingly pledged financial support to the runner are then hectored for a few weeks until they pay up. “Grammie, you owe me $20.”  That sort of thing.  (By the way, Grammie, this is your notice, thanks for the pledge!)

Only this year, our Godzilla-minded pup apparently has other plans.  She has laid waste to our Walkathon.  That may be a bit of an exaggeration.  But she did eat Everett’s Walkathon Pledge Form.  Or at least she ate approximately 65% of said Pledge Form, rendering said Pledge Form effectively useless. 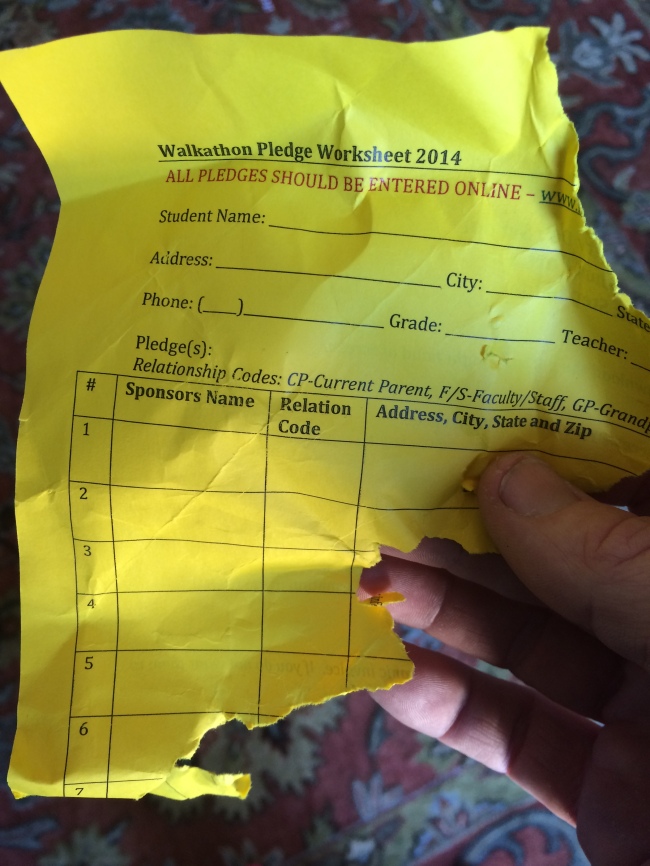 As you can see from the empty boxes, we’re a little behind with soliciting pledges this year.  Presumably, Wailea does not want the Walkathon to happen ten days from now, and she is evidently willing to go to extreme measures to stop it.

Regardless, we must carry on!  Wailea’s evil gesture will be for naught. (Grammie, do you hear me?  I said “for naught.”  Get ready to pay up!)  The Walkathon will go forward. Everett and his school chums will cut corners to achieve an impossibly high number of “laps.”  And we will then get on to the business of breaking knee caps to collect.  It doesn’t matter if you knew that you made a pledge or not.  And “the dog ate my Walkathon Pledge Form,” as you can see, clearly is not a credible defense.  (Grammie, are you listening?).