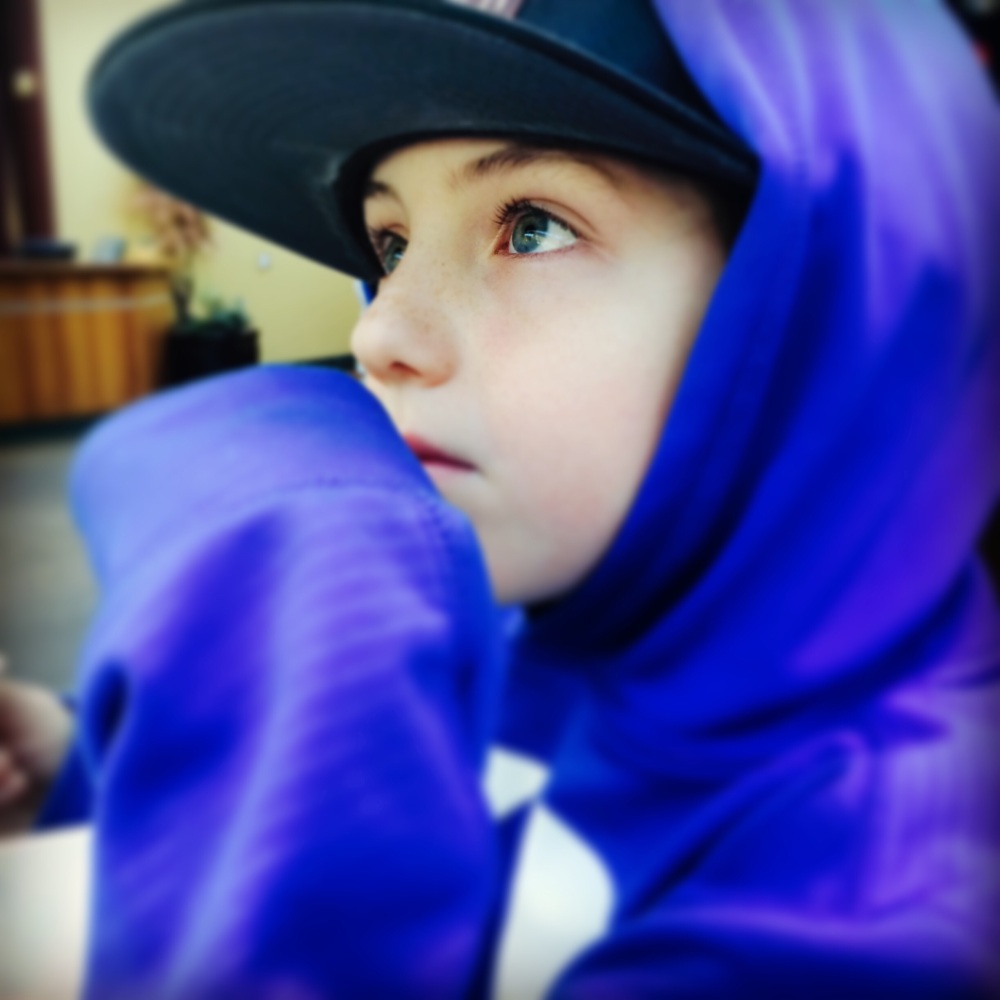 We had one of those “lucky to live here” experiences last night.

Hilary had the fabulous idea of eating dinner on the deck of Cavallo Point Lodge, since we had to drop Max and a friend off out there for a Bat Mitzvah; our end of the carpool bargain. Rather than battle traffic, let’s just stay there and have a nice meal with Everett. We don’t often spend time alone with Everett, and it’s probably a healthy thing for him to be the center of attention from time-to-time instead of his older brother holding court.

Due to sleeping in a bit instead of hopping in the Bay with a swim buddy, then coaching Max’s Little League game in Fort Scott, then stewing over our team’s loss in said game, and then gluing my eyes on the Duke-NC State hoops game while clutching the TiVo clicker in my fist for a couple hours, I hadn’t broken a sweat all day.  I need to break a sweat every day, pretty much.  And the drive over the Golden Gate Bridge to Cavallo Point was imminent.  So I got clearance from Hilary for me to run to Cavallo and rendezvous there for dinner.

The timing had to be perfect. I figured the run was about 6 miles. I figured I would run maybe 9-minute miles. And I packed a bag for Hilary to drive over with all the stuff necessary to turn a sweaty guy into a polite, non-stinky, dinner companion. I pulled on all my running gear while trying to manipulate the TiVo’d Duke game to finish so as to preserve my increasingly tight run window. I resorted to hitting the fast forward button with a single tap during free throws when the game clock stops. I despise the single click, turning games into a Charlie Chaplin flick.  But I had to break a sweat, and I had to not repay my wife’s generosity with a late dinner arrival.  Glancing at my iPhone’s digital time readout in one hand, gripping the TiVo clicker in the other, in a desperate bid to make sure I left the house at 545pm.  No matter what.

I took off out the front door at 548pm; Duke having salted the game away with only a few ticks of the game clock remaining.  Not the most relaxing way to watch a game, but it worked.  I was out the door, pretty pleased with my multi-tasking prowess.  Big smile on my face, even running at a much quicker pace than usual.  All’s well in the world.

Until 14 minutes into my run, when I realized that I had lost track of eating and hydrating in the midst of a busy day. I hadn’t eaten anything since 8am.

I started to feel the hints of what I refer to as a “sugar crash.” Pretty predictable if running or riding late in the day, if I haven’t paid enough attention to eating and drinking, and if I have stupidly brought nothing along to eat. The result is light-headedness, sweating and shaking like someone being interrogated under a hot lightbulb, and a ridiculous craving for a Snickers bar.  Or a Coke. Or a slice of pizza.  Pretty much anything, actually.

I did manage to grab my debit card on the way out the door, tapping at it with my fingers on occasion to ensure the card was still with me and not dumped somewhere along the Crissy Field esplanade.  I patted the card again now, with shaky fingers, relieved that I could just swing into one of the new tourist-friendly shops near the Bridge’s south entrance, trade a swipe for a Snickers, and be back on my way.

No dice.  Doors shut at 6pm.  I had missed that cut off by 3 minutes.  The same 3 minutes I used up watching the tail end of the Duke game.  I shuffled my way across the bridge, starving and delirious, seriously contemplating snatching a ClifBar out of someone’s pocket if I happened to see one.  I was getting desperate.  Maybe a vending machine on the other side of the bridge?  Nope. But at least at that point, I could see Cavallo Point Lodge down off in the distance.  I figured I could stumble the rest of the way, and suffer no additional criminal urges during the home stretch.

But I wouldn’t take the well-traveled roads that wound their way serpentine between where I stood and where I needed to find something to eat.  That would take too long.  I spied a fire road winding downhill and hoped it would dump me down near the bottom.  The fire road narrowed, however, then stopped abruptly altogether.  The clear DO NOT ENTER, NO TRESPASSING and military-looking fences fairly commanding me to turn on my heels and run back up the trail.  I didn’t have enough gas in my tank to do that, and I was running out of time ’til rendezvous, to boot.  Instead I scurried down a steep “trail” of loose dirt right next to the fencing.  I used the fingers of my right hand to slow my descent using the links along the cheese grater fence, while also trying to keep my feet from skidding or stepping on broken glass or through poison oak.  The whole time I was also rehearsing my explanation for the authorities as to what the hell I was doing, fairly certain I was in someone’s binoculars by now.

A few more hops over thickets of brush, traipsing through what now resembled a homeless encampment, a leap over a WWII-era drainage ditch, and I was back on pavement, back in civilization.

And suddenly in the mix with a half-dozen other runners on a road where no one runs?

An older gentlemen, clearly exhausted, stopped in his tracks, and watched me jog past him.  “Good job, man, way to go!” he said.  Then I surmised he and the others were just finishing up some staggeringly long endurance run.  So I laughed, turned my head back towards him and offered apologetically, “Thanks, but I’m not doing your race.”  I didn’t want to be responsible for breaking his spirit given how rough he looked at that moment. I caught up with the next zombie runner.  He slowed to a shuffle, and when asked, told me the run was 50 miles and the finish line was visible at that white tent over yonder.  Wow, 50 miles.  I said, “congratulations,” and felt pretty ridiculous about bonking after running for 14 minutes, and about the half-panicked desire to rob someone of a candybar, and about the trespassing that followed.

I managed to beat Hilary and the Prius by a few minutes, I was no longer hungry, and I was energized on the heels of serendipitously falling in with these courageous runners just before they accomplished something life-changing.  Hilary, Ev and I later ate while sitting on a bench hip-to-hip-to-hip, facing the evening Bay, covered in warm blankets and enjoying a few delicious IPAs.  Somewhere along the way, unprompted, Ev announced, “I gotta be honest with you: I’m magnificent.”

He hit the nail right on the head.