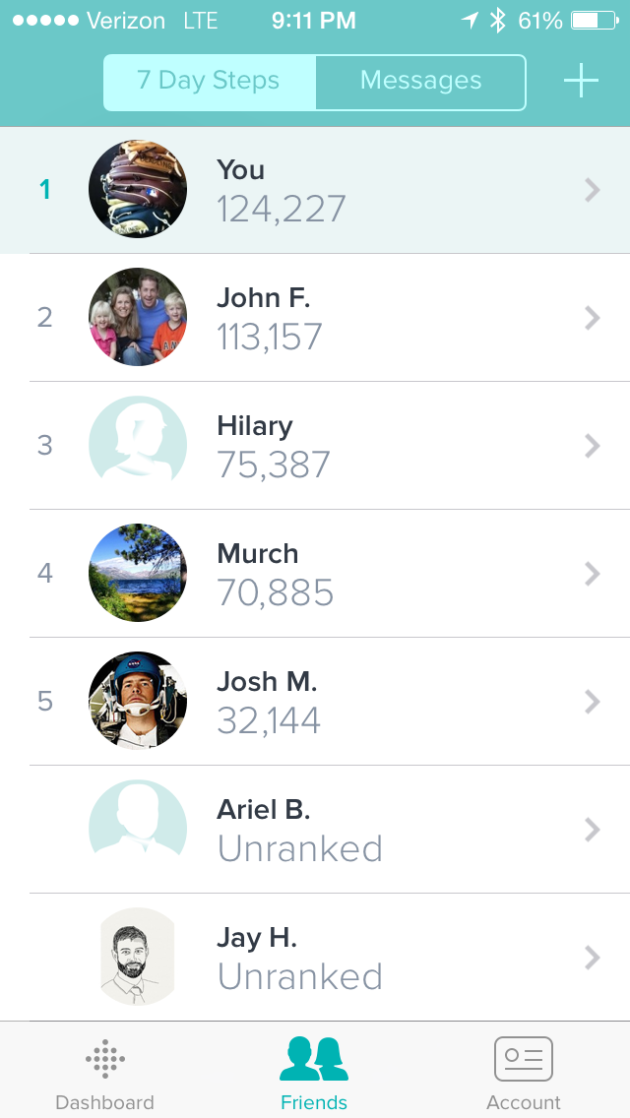 This is a follow-up to an earlier post 5 or 6 weeks ago on my experiences with the Fitbit phenomenon, desperately clawing my way to the top of my Fitbit totem pole and staying there.  That was maybe 500,000 steps and 300 miles ago.  And as you can see from the screenshot above, I am still sitting atop my totem pole.  With ease.  I am THE MAN.

At some point within the last few weeks, I stupidly invited a particular buddy of mine to connect via Fitbit.  I had been fairly dominating the totems on my pole up to that point.  I had gotten Fitbit-overconfident.  Fitbit-cocky.  When Icarus brazenly flew too near the sun, his waxen wings melted and he dropped like a rock.  The Fitbit may be water-resistant, but it also “melts” when too close to the sun, I am here to report to you (metaphorically).

I had failed to think through my casual Fitbit invite, to perform the necessary due diligence, to vet my invitee.  Stupid, stupid, stupid.

You see, John (may or may not be his real name) commutes to work on foot every day, racking up six miles just in the ordinary course of business.  Whistling the whole way, I imagine.  And he generally leaves for work early, before I’m even awake.  That means that (a) on my first totem pole check upon rising, John has already amassed a three-mile head start, and (b) he will tally my entire day’s worth of steps without even breaking a sweat.  Add to this the fact that John is also a triathlete.  So his accelerometer is pretty much never at rest.  The bastard (I’m referring to both John and his accelerometer) is relentless.

So how is it, you may ask, that my name appears atop the totem pole pictured above, instead of John’s?

John travels out of town quite a bit, to the midwest in particular.  When he is in the air, that’s “go time” for me.  I sink some serious steps into him here on earth, confident in the knowledge that his trips to the on board restroom are infrequent and requiring only a handful of steps.  I don’t wish anything tragic on him, but a little extra turbulence to keep him belted to his seat for hours on end?  Yes please.  I aim to crush his spirit when he lands, pulls up the Fitbit iPhone app, and sees me 20,000 steps ahead.  That assumes, of course, that he checks his app.  That the competitive Fitbit-fire burns in his belly as it does mine.  That he is locked in this pitched Fitbit-battle with me, his arch Fitbit-nemesis.  He is none of these things of course.  He couldn’t care less.

But I press on.

John and I also coach a Little League team together, as we have done for years now.  I have discovered that I can aggregate maybe 2 or 3 miles of steps in the course of a 90-minute practice.  These are like “free” steps!  I haven’t shared this bit of Fitbit-wisdom with my assistant coach.  Nor will I.  Rather, I make sure that John runs a drill station where he must be sedentary, standing absolutely still.  Holding the “Powerstick,” for example, which requires him to stand in one spot with feet locked in place while one player at a time takes his stance and swings at the yellow ball at the end of the long stick in John’s hand.  No Fitbit steps gained here.  Zero.  Take your time, John, be deliberate, stand…completely…still.  Whatever you do, for the kids’ sake, don’t move!

Meanwhile, I run alongside my players in warmup drills, lifting my knees as high as they will go and pumping my fists.  I demonstrate–repeatedly–how to sprint through first base, then how to round first base to stretch it into a double, a triple, a round-tripper, and so on.  Bring on the step count, baby.  Run it up!  I am always the coach to throw batting practice pitches to our players.  It is no coincidence that my Fitbit accelerometer gives me credit for all those small steps on and around the pitcher’s mound.  Look at John over there, standing dead still holding that stick.  Feet locked in place.  Look at me, on the other hand, I am ticking these steps off at a record rate!  And he has no idea.  That is because he couldn’t care less, and is completely oblivious to this ridiculous, faux Fitbit-cage match I’ve manufactured in my own pea-sized mind.  But I press on.

The other night, John treated me to a much-appreciated steak dinner near Union Square.  Wonderful male-bonding way to spend a Friday night.  Very generous of him.  How did I repay his generosity?  By marching home after the meal, ringing up step after step, to ensure that John would go to bed an impossible number of steps behind me.  I even warned him during dinner that I planned to walk home, and that he better think about what kind of Fitbit-hurting I would be putting on him.  Never mind that I wasn’t dressed for the 3 or 4 mile walk up and down the San Francisco hills, that I was wearing a glorified pair of flip flops, and that my feet would be bone-sore for a couple days afterwards.  I had to crush him, and I did, and that’s how I got back on top of the totem pole pictured above.

It doesn’t matter, once again, that John is perfectly oblivious to all my Fitbit-machinations, that the Fitbit iPhone app is not one that pops up on his iPhone when you push the home screen to bring to the fore the most recently-used apps.  It’s possible, I admit, that John has never even installed the Fitbit app on his iPhone.  It’s possible, in fact, that he may never even see this very blog post.  (This I can fix, as I probably won’t be able to resist emailing him the link as soon as I hit “Publish Post.)

Like I say, he couldn’t care less. But I am undeterred.

I am also just 240 steps ahead of him at this moment.  I literally just checked.  The good news (for me) is that we will be coaching a Little League game together tonight on Treasure Island.  Looks like John will be working the Powerstick station again….