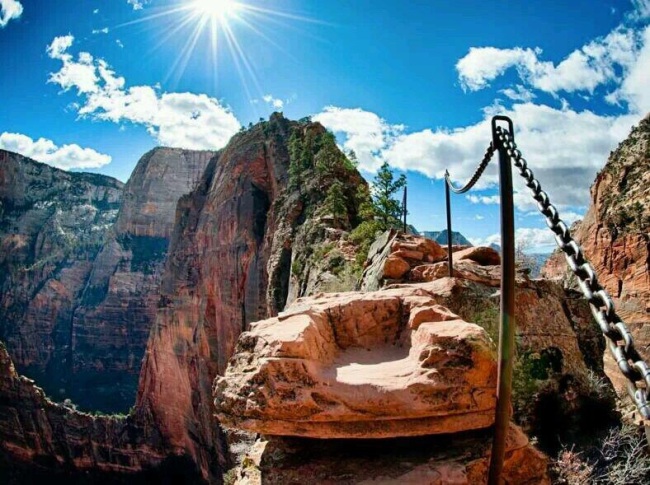 Turns out I’m actually not afraid of heights.  Rather, my fear stems from concern about my companions’ well-being at great heights.  I stumbled upon this discovery yesterday, while hiking an especially infamous, anxiety-provoking rock feature in Zion National Park — Angels Landing.

Known earlier as the Temple of Aeolus, Angels Landing juts up from Zion Canyon to 1,488-feet.  That’s not a particularly daunting data point, though.  Even considering that the Canyon floor itself sits at 4,300 feet above sea level, so the summit tops out at about 5,790 feet.   A bit of altitude is at play, for sure, but it’s a minor player in this drama, at best.  And it is definitely a drama.  The National Park Service website officially recognizes five, non-suspicious fatalities along Angels Landing.  And at least 7 additional deaths have been reported here and there.  I’m amazed this number isn’t 7 per day.

The main protagonists at work here, in my view, are (a) the haphazard collection of tools to deliver a hiker to the summit, and (b) the ridiculous frequency of hair-raising exposures over the course of maybe 90 minutes.

As for protagonist (a), someone indeed cut steps into solid rock circa 1926, but the stairs hardly make for a staircase. Uneven, scattered, leaving off here and picking up there.  I cannot recall more than 30 or 40 features that I could honestly characterize as “steps.” On the other hand, I am grateful for the black chains and stanchions spread, more or less, continuously from the start of the final push to the summit.  I am absolutely bewildered, however, about the handful of naked stretches between chain sections, leaving the hiker totally exposed, almost literally grasping at thin air, all concentration focused on getting within arms’ length of the next section of chain.  Check out this short video from my Facebook page–taken during a fairly “safe” section heading back from the summit–and you’ll see what I mean.

Gratitude and bewilderment are a heady mix; all the better to make one’s head swim.

This brings me to the second primary factor that makes Angels Landing one of the most feared hikes in the National Parks system:  The exposures.  I never truly comprehended the meaning of the phrase, “my head is swimming” until my head swam yesterday afternoon. Each time I made the mistake of lifting my gaze beyond the relative psychic safety of the 3-foot circumference around my feet, my brain wrestled to compute the impossibly grand scale, the layers upon layers of foreground and background, the unfathomable drops straight down to the clearly visible canyon floor, and the incredibly poor judgment being exercised by the body carrying the brain into this scenario.  Makes me a bit queasy just calling back up these little glimpses.

Strangely enough, though, I was OK with all of this.  OK because I had figured out that by operating only in the throw of my own headlights, I could reduce the otherwise overwhelming to bite-sized pieces.  Not once did I pause, take in a self-satisfied breath, scan my lofty surroundings proudly, and admire the beauty of it all.  That is a bad strategy.  I didn’t see anyone else do this, either. Rather, I stared mostly at my feet, lifting my iPhone up quickly here and there to snap a picture, paying very little attention to framing, focus, lighting, etc.  I photographed almost apologetically. “Don’t hurt me, Angels Landing.” Remember the scene in Dumb and Dumber in which Lloyd sheepishly and surreptitiously points at Harry when asked by Sea Bass who had just thrown a salt shaker at Sea Bass? 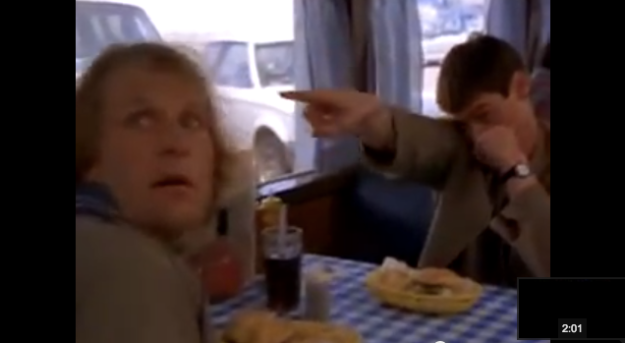 I snuck in iPhone camera clicks of my environs the way that Lloyd threw Harry under the bus to Sea Bass in an ultimately unsuccessful bid to avoid getting his ass kicked by Sea Bass.  My Sea Bass was Angels Landing, and I wanted to avoid offending my Sea Bass with brazen picture-taking.  My shitty photos are a testament to my observance of the proper degree of respect.  I’m OK with the poor quality of my little mementos.

The trickiest part for me on this hike was coming to grips with the fact that my hiking companions were all grappling with these same hair-raising dynamics (though probably not analogizing them to a Dumb and Dumber scene).   And while I can control the throw of my own headlights, I can’t control the throw of my companions’ headlights.  Not to mention, several of those companions are years away from their learners permits.

I can conquer–or at least tame for a time–my own fears.  I am powerless with respect to others’.

And that is the part that knotted my innards and made me take short little breaths along the spine of Angels Landing. Sure, I deliberately hiked at the front of our group of ten, reassuring myself that I would be able to call out to the others regarding one or another tricky spots, encouraging all to follow a slow and measured pace, maybe communicating with my own body language some sense of calm via my own (seemingly) confident movements from one chain section to another, one carved stone step to another.

But if I am being honest, they were all on their own.  Every one, ultimately on his or her own.

Things could have easily gone very wrong on innumerable occasions very quickly, and there was absolutely nothing I could do about that.  Nothing.  That plain truth was at work in my head during the entire hike up and down Angels Landing.  I calculated the odds tied to every sketchy stretch, steep drop, clumsy hiker above us, etc., doing the math on whether the members of my group could accommodate each new risk factor.

At times, the extent of my inability to avoid something terrible happening to someone I cared about at any moment was near-paralyzing.  I had to regain control of my breath, lower my focus back down to my feet, and resume my plodding course one step at a time.  More importantly, I had to let go.  I had to trust that the others would do the same; that they would figure out on their own how to make it up and back down this very real challenge without experiencing very real consequences.  This, for me, was the hardest part.