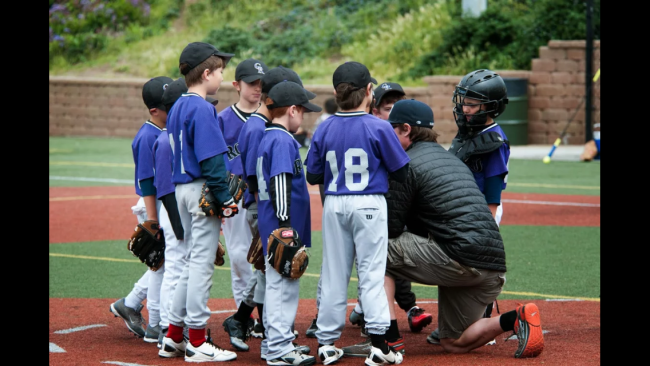 I’m aware of milestones, especially the ones that mark the end of something or the beginning of something.  Sometimes the same stone marks both.  The end of one journey overlaps completely with the start of a new one. One such milestone is on my mind this morning: The end of the regular season for one of my San Francisco Little League teams.  We played our final regular season game yesterday afternoon.

These are 8 and 9 years olds, for the most part, and my youngest son Everett is among them. Now two or three months into this, the boys are finally starting to show signs of “getting” the system we’ve been trying to impress upon them with every practice, every game.

On a macro level, they will answer, “Hustle,” to the question, “What is always in our control?”  And they can rattle off pretty easily a handful of concrete examples of what hustle looks like on a baseball field.  That’s different than just repeating back some memorized mantra by rote.  For example, the team has embraced what we’ve coined as “Show and Tell.”  In the field, all of our players now communicate with all of their teammates before each opposing batter steps up to the plate.  The know to “show” the number of outs to each other, holding aloft a fist or maybe horns to every player, and to “tell” the situation — shout out the outs and what the infielders and outfielders should do with a ball hit their way.  They’ve moved beyond giving me the horns and shouts as if they’re being quizzed.  They now seek out their teammates’ eyes in a genuine quest to communicate something important.

The first baseman knows he is accountable for the left fielder who has his hand jammed in his back pocket; knows it’s his job to inspire that chilly hand out of the pocket and up into the air to signal an awareness of the game situation.  The on-deck guy knows he is responsible for grabbing a discarded bat at the plate, and that he needs to handle this task in a jog if not a sprint.  Everybody nods when I remind them to get their bare hand involved in receiving the ball, and their once melodramatic reactions to a stung hand have given way to barely perceptible winces.  That gloveless hand is their best friend, and the sting means they’ve done something right.

The once comically long-winded instructions doled out from my 3rd base coaches’ box are now staccato short.  One or two words chiseled down to capture something each batter is working on.  A quick trigger to remind one to loosen up, another to align his grip, another to keep his head and eyes still and quiet on the swing, another to keep both hands on the bat until those hands have done their jobs and the top one can let go.  “Two hands,” “fix your fingers,” “fix your foot,” “wider,” “see it.” It’s a thing of beauty by this stage, watching a player make an adjustment at the plate with a knowing head nod, in response to only a word or two.

So on a macro level, it’s fair to say these boys as a group have learned a considerable amount about the nuts and bolts and how to play together as a team.  Not just saying it, but doing it, or at least recognizing what that is supposed to look like.

On a micro level, almost everyone has cried.  I’m including myself in that group. The characteristically flat affect ever present on all their faces masks a tempest of emotions ready to explode or implode at any moment.  I’ve learned to pick up on each player’s body language to learn what’s inside at that moment. Eye-balling them as they run across the grass towards me to join a just-starting practice, water-bottle sloshing with each stride.  Peeking at their eyes as they get a look at the day’s lineup on the clipboard for the first time.  Listening to how they speak to one another, with particular attention to whether they are being kind — being “a good teammate.”  I have zero tolerance for experienced players speaking harshly to the less experienced.  Unfortunately for the more experienced players, I have zero tolerance for them not developing thick skin when the less experienced don’t always follow this same rule.  The more skilled players by now understand they have a key role in helping the less skilled become more skilled. Within reason, if a less skilled player razzes (intentionally or otherwise) a more skilled player, I’d like for that skilled player to take it in stride.  They can handle it.

And there is most definitely crying in baseball.

A genuine show of emotion in our post-game circle will move me.  I’ll take a breath to fill my lungs full for a planned, long-winded answer but my breath will catch.  A little constriction in my own throat reminds me how much I care about these boys, those tears, and this moment.  Particularly on milestone days like yesterday, I am grateful and feel incredibly fulfilled.  I heard myself yesterday, unprompted, telling one of my boys (my assistant coach’s son), “Hey, you are a good kid and I am very lucky to be your coach. Thank you.”  Not the kind of advice base runners on 3rd base are expecting from their coaches at that moment.  But that’s how I felt, and I wanted him to know it.

I live for these moments.

And I am agonizingly aware of the finite number of such moments that remain.  I feel the sand slipping through my fingers.  I see the boys looking forward with their eyes, focused solely on what will happen next.  Not so much, anymore, looking at me for direction or for acknowledgement of a right answer.  They are ready to move on.  And whether I am ready or not ready isn’t the point.  If I’ve done this right, they have no idea about my own state of readiness — ranging from non-existent to fragile at best.  Well we have at least a couple more games to ride out together before these moments are a collection of memories captured in a team photo.  I have a stack of them (memories and team photos).  So bring on the playoffs!