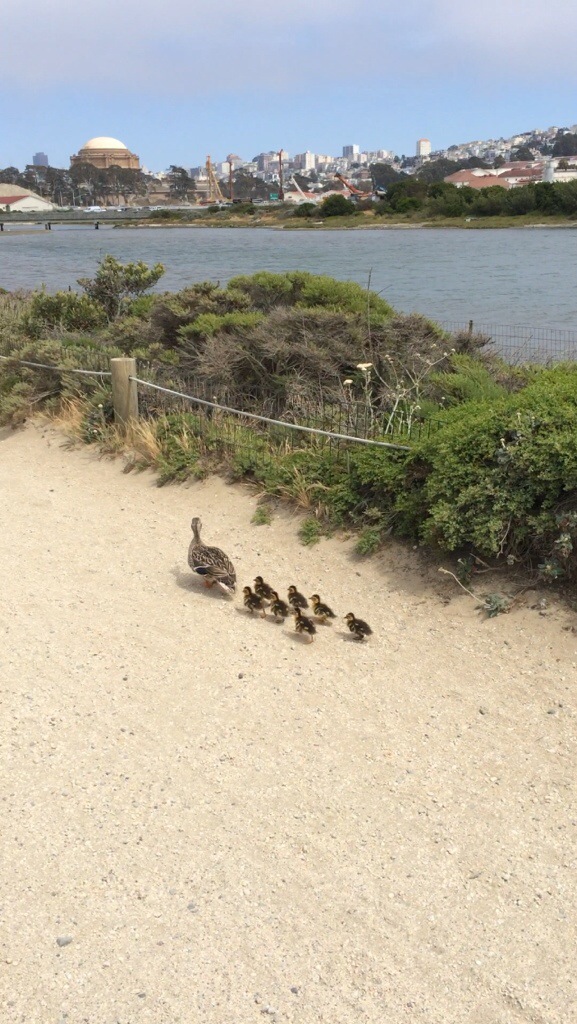 I stumbled on this scene yesterday along Crissy Field in the midst of a slow afternoon run.

The run was my first in nearly 3 weeks. For the past 40 minutes, I had been shuffling along distractedly, constantly evaluating my body’s feedback. Can I pull off this race in 10 days or not? Has this sneaky virus robbed me of the training I dutifully banked in recent months? Or did I have enough in my account to avoid being overdrawn on race day? If the latter, I could probably still grind through the day. It would just be more painful than I had originally bargained for, most likely. But I hadn’t felt that sort of “make you want to quit after the next step” pain in over 10 years.

That’s a long time. Perhaps too long. I once knew exactly when to expect the pain, or at least recognized the early signs of its headlong rush in my direction. Could steel myself for what was about to come, confident that I could manage the suffering. Maybe even welcome the suffering. Pass through it on the other side and be on my way.

So these were the types of self-absorbed, myopic notions with which I was wrestling when I came upon the ducks.

I stopped in my tracks at the sight of them. Quite a scene. Mama duck with a half-dozen fuzzy ducklings at her webbed heels. All the inconsequential thoughts about an upcoming triathlon disappeared from my mind. Replaced in a heartbeat by an out-of-place duck and her kids zig-zagging right in front of me. And of course I didn’t just see ducklings.

The ones that started out as these little ducklings did, fast on my heels, trusting my every move, every choice. Going wherever I led them, serpentine, through the formative stages of their young lives.

If I sneak a quick look behind me, Everett is still there in my wake. So long as he doesn’t expect me to sneak that look. If I telegraph it, I will see a seemingly older boy, walking casually with his flat brim capped-head down, hands stuffed firmly into his pockets, choosing his own path. Nevermind that his path happens to be in the shadow of his dad’s. That’s just coincidence.

My older duckling, Max, is not such a duckling anymore. When I glance back, he’s not there. He’s followed me just about as far as he’s going to. Splitting off now at a curl, investigating a broader path than the one I’ve thusfar led him down.

On two occasions this past week, I caught myself staring at Max from a close distance. Both times I hadn’t seen him all day. The image of him burned into my mind’s eye did not match the young man now standing before me.

The piercing blue eyes remained, the same ones that have always unsettled adults since they give the impression that the adults are looking into the eyes of another adult. But now he’s a bit taller, his face taking on a new angularity, his body language giving off the air of being comfortable in his own skin and silently encouraging me to do the same. I see now the young man he is becoming, and it steals my breath away.

The suddenness of this. The realization that he is on his own path now. That hopefully the initial trajectory we set will propel him in the right direction, if only slightly. All of our Herculean pushes and pulls seem to have only amounted to releasing him into space. Moving in slow motion now, beyond our gravitational pull. Hopefully capable of navigating his way.

“Dad, why aren’t you talking?” This is how Max jars me from my trance, a subtle hint that I’ve been staring at him again. I say, “Sorry, son, I just saw very clearly the young man you are becoming. Right before my eyes.”

That might be a bit deep for a still-12 year-old. Could even be categorized as goofy, reminiscent of my 7th grade self being at a loss for (intelligible) words to woo a young lady into a “moonlight skate” at the indoor rink. Disco Ball spinning overhead, Little River Band’s “Reminiscing” flowing through the overhead speakers. I feel those same butterflies now, when I see Max after not seeing him for a full day.

So thank you, world, for not stepping on my little ducklings underfoot. One is now off on his own little trail. The other, I think, is still right behind me. Just don’t tell him I know he’s still there. Make way for Beadlings.