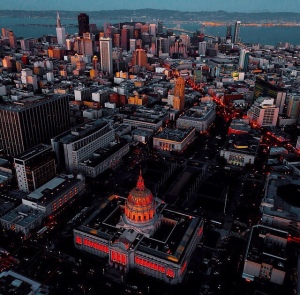 Three World Series Championships in the last five years.  A dynasty, they say.  My kids have no idea how lucky they are to be living in this Land of Giants.  Their maternal grandfather — a lifelong, long-suffering Red Sox fan (still) — waited nearly 70 years to witness his hometown team win a World Series.  My kids have experienced three, count ’em three!

And it’s not just the being a fan part.  Forty-thousand fans turn the turnstiles at AT&T Park for every home game.  We go to our fair share of games.  The four of us happened to be on-hand at the ballpark when Cain threw his perfect game.  And we watch or listen to just about all of them that we don’t attend.  Hanging on Kruk & Kuip’s every word while crammed into our Prius or piled on the floor at the foot of the television scratching our family dog’s belly.  We have shelled out our fair share of shekels, too, for the merch:  Orange panda hat, Giants flannel pajamas, “Always October” hoodies.  The whole sh-bang.  Our fandom bona fides are for real.

But the best part is the “hometown team” part.  We and our kids regularly bump into Giants players.  A couple years ago, I passed Brian Wilson walking on Sansome Street.  At the time, he lived around the corner from us, so I lamely offered up a quick, “Hey, you’re a long way from your neighborhood.”  Weezy dryly responded, “Everyplace is my neighborhood” without breaking stride.  Later that same year, he gamely signed autographs for my son Max’s San Francisco Little League All-Star team.  We had spotted him having dinner next to our team’s dinner one night, and after some cajoling, he came outside and made the kids’ day.  He even laughed aloud with Max when Max explained to Weezy that his broken wrist in a cast was caused by falling on the treadmill in our garage. 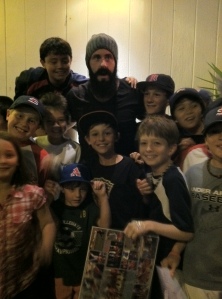 A few years back, Everett was invited to say hello to Pat Burrell seated in the rear of the now-defunct Grove on Chestnut.  A quick conversation, but it left an impression:  Everett’s family drawing around Christmas-time that year included Pat the Bat.  And I’m OK with that.  We would regularly see Aubrey Huff at Max’s swim lessons in the Presidio.  I’d leave him alone, giving him his space.  But I couldn’t help myself on the morning after a particularly hard-fought post season win.  Striding out to the pool deck, Aubrey caught my eyes, and we both raised our arms and shook our fists at each other triumphantly.  It was genuine; I felt as if I had played a role in the win.

A couple months ago, I was working at home and fully-engaged in a conference call.  Max stuck a piece of paper in my face with something about Jeremy Affeldt and coffee written on it.  I waved my hand, annoyed with the distraction.  Max disappeared, texting me this photo a few minutes later —

So net net, we’re pretty thrilled with the Giants’ success of-late, for sure.  But it’s the unexpected moments when our kids stumble into the players here and there that we appreciate the most.  We feel like we’re a part of something, rather than just witnessing something.  And we know we’re damned lucky to be living here in the Land of Giants.