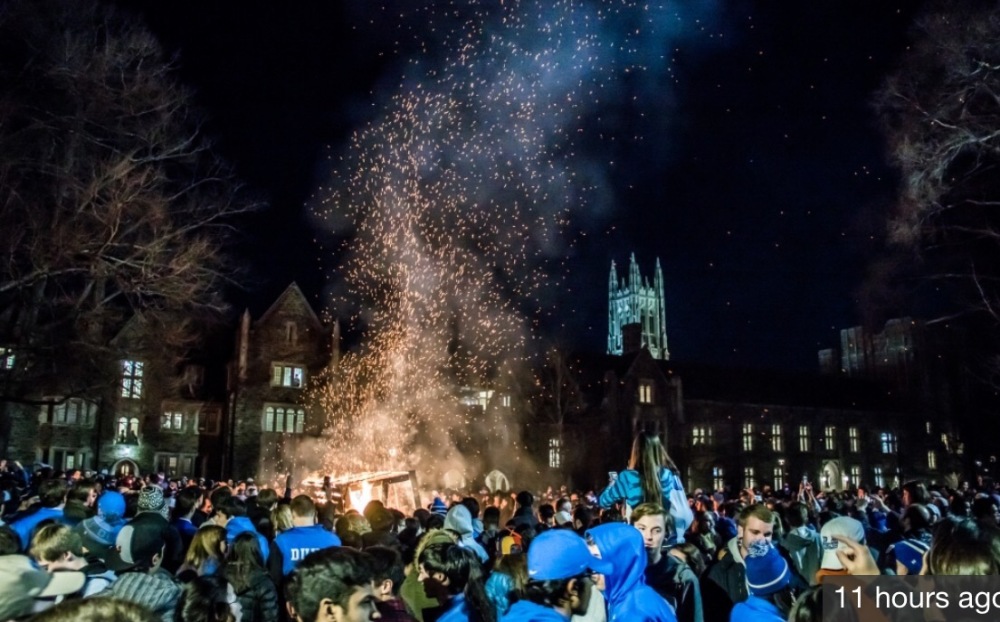 Happy Friday, good people. Despite the headline, this blog post will be bereft of current events of the political variety. Or at least I plan to write this post with the clear intention of steering clear of that high glycemic index stuff. Or try to.

Instead, I want to talk about burning furniture.

The above image was captured last night on Duke’s West Campus and published in this morning’s Chronicle. In light of news reports of late, one would be forgiven for presuming the photo reflects some sort of violent protest. College kids losing their minds over what’s going on in DC. And recklessly, dangerously lighting ablaze anything that could be lit ablaze. And stoking the fire with piles of more unlikely fuel until the flames practically lick the brooding gargoyles standing sentry in the Gothic towers overhead.

What is the world coming to?!

In truth, this photo gave me a sense of relief. A brief respite. A breather. Although I had watched the game myself last night with an old friend, I forgot to savor it. I neglected to bask in it for a bit, allow myself to enjoy something simple, primal, and longstanding. But the kids didn’t forget. They do what Duke students have done for decades after a big win — particularly over Carolina — they burn shit. Typically, oversized wooden benches constructed by fraternities and other living groups and such. Ostensibly for sitting; in actuality, fodder for hoped-for celebratory bonfires.

So given the state of the world, how great is it to see people experiencing genuine joy? Stretching out a moment. Following a long tradition involving building a huge bonfire because they are happy about something. And although it was the kids who lit the fire, I imagine there are some adults smiling this morning. As they meander past the charred embers on campus. As they catch the scent of burnt hardware store pine from a mile away. And as their Facebook feed conjures up visceral memories of better days. Ones from long ago and ones yet to come.