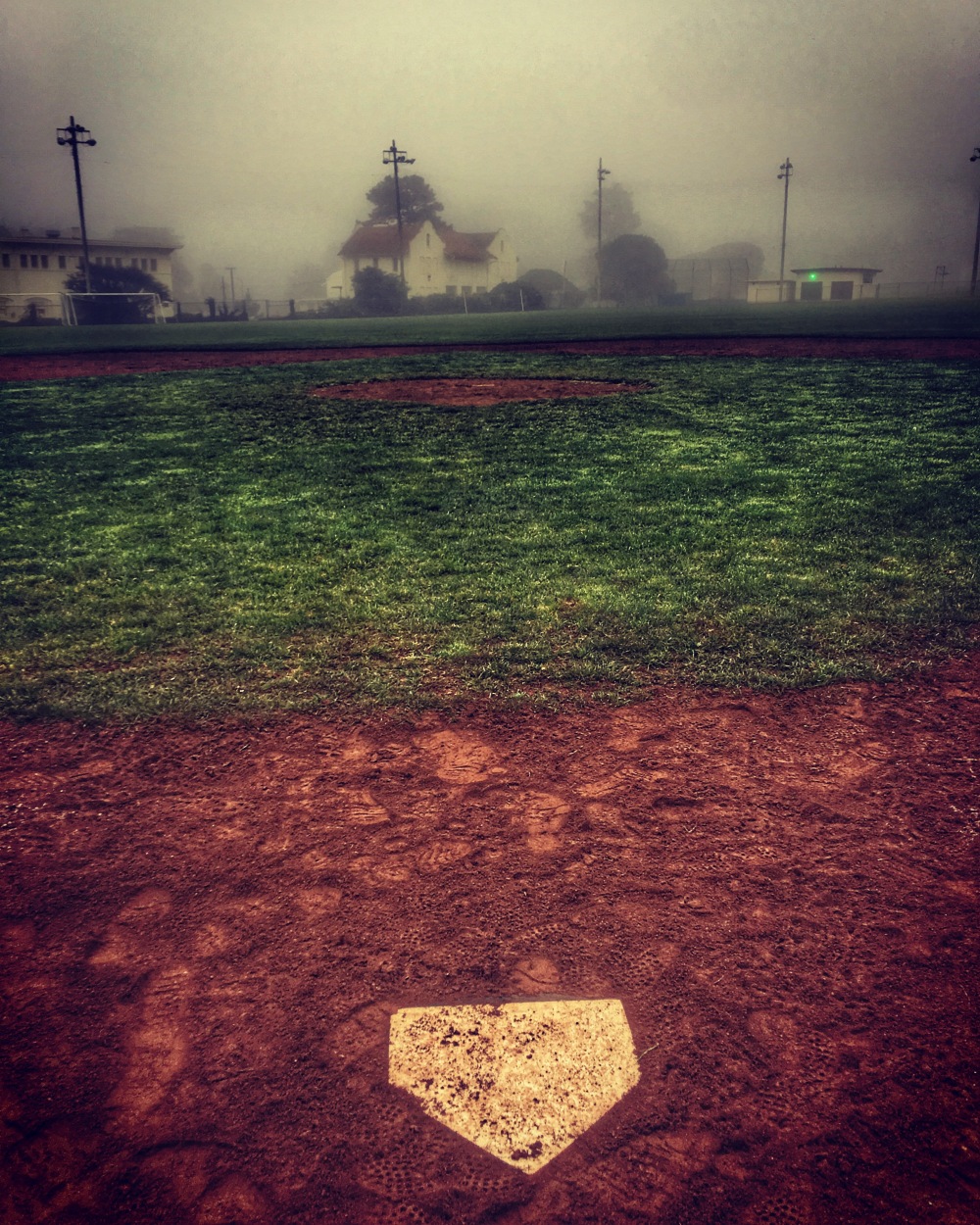 This is what Opening Day looks like in San Francisco.  Technically not “Opening Day.” That event and its annual parade was actually cancelled a weekend ago. The rainy conditions introduced the unpleasant prospect of baseball-cleated pre-teens sliding around in the payload of rented pickup trucks like a pile of slippery mackerel.  This would have been my last San Francisco Little League Opening Day Parade, since my younger son will graduate out at the end of the current season.  I’ll get over it, but I would have liked just one more trip around the block with a pile of fish.

Even after 12 or 13 years of these rides, I can almost remember each.  When loaded with a dozen 50-pound first-graders, space comes at a premium back there for coaches who haven’t seen first grade and 50 pounds since 1975. Sixth-graders now, the players on my Majors A’s team this year have doubled in size from their first-grade selves. We coaches have, maybe, added a few pounds here and there as well. Sitting in the open air on the bump of a metal wheel well, pinching one’s knees together as the driver careens around the Marina, the players rhythmically banging their fists on the quarter panels, sounds, objectively speaking, undesirable. But I would have liked to take one more spin around the neighborhood, my own hand stinging at the end of it (it’s not just the kids that do the banging).

Thankfully, lightning and sneakers losing purchase and liability did not come into play for our team’s actual first game, which transpired this past weekend.  This is not to say that my boys (it’s only boys this season) pranced around in the bluebird skies, blazing sunshine, and fresh cut grass from my youth. Nope. I suspect our field had recently played host to a lacrosse game or rugby match or Friday evening adult softball game featuring a keg drained down in the visitor’s dugout. The field has seen better days. I can’t blame the outfield, pockmarked with ankle-twisting gopher holes, on those other folks, though.  That’s just nature.  The kids have been navigating those vermin-built land mines for so long, we don’t even bother mentioning this hazard to our right fielders anymore.

The unusually heavy fog added an interesting variable to the mix. The Golden Gate Bridge’s fog horn moaned the entire night before our game.  The late evening news weatherman, his opinion seconded by the opposing team’s head coach, said it would be thick.  He was right.  At 7:15am on Saturday morning, the fog bank operated as a de facto outfield fence.  If any player was able to jack one out into the fog, literally hitting the ball out of sight, I suspect the home plate umpire would happily circle his index finger in the air.  That would be a very cool sight, and I wouldn’t care whether our team did it, or their team did.

Given the paucity of playable fields within the 7 mile by 7 mile footprint of San Francisco proper, the League struggles mightily to accommodate the 1,000+ rabid little leaguers with crooked caps and untied shoelaces. Hence our 8am game on Saturday.  My team’s players, presumably still bleary-eyed from an all-night Fortnight video game bender, drifted onto the field one and two and three at-a-time; eventually comprising a full quorum by the time the umpire requested my hand-written lineup. Our pre-game drills turned just-unwrapped official league baseballs into the heavy dirty gummy dun spheres on display at the Hall of Fame in Cooperstown.  I whack a brand-spanking new ball with my fungo bat out into the outfield, someone (hopefully, eventually, corrals it), and throws back to me an unrecognizeable ball covered in mud as though it had time-traveled (backwards or forwards, I’m not sure which).  But none of the players and none of the coaches complained about the mud balls.

As it turns out, we got our butts kicked on Saturday morning.  Wasn’t much of a contest, really. Sure, we talked about it after the game.  A little bit. The strikeouts and botched plays and missed steal signs and such.  But that stuff hardly mattered as we all knelt in the still-wet grass surrounded by the still-lingering fog. I glanced around this semi-circle of boys, ready smiles on their faces, some giggling and poking at each other, no hints of dejection or disappointment over why didn’t I swing at that third strike. In that moment, I thought to myself, “getting our butts kicked never felt so good.”

This is my last season, and I’ve resolved to savor every moment of it.  So bring on the rain and fog and gophers and mud balls.