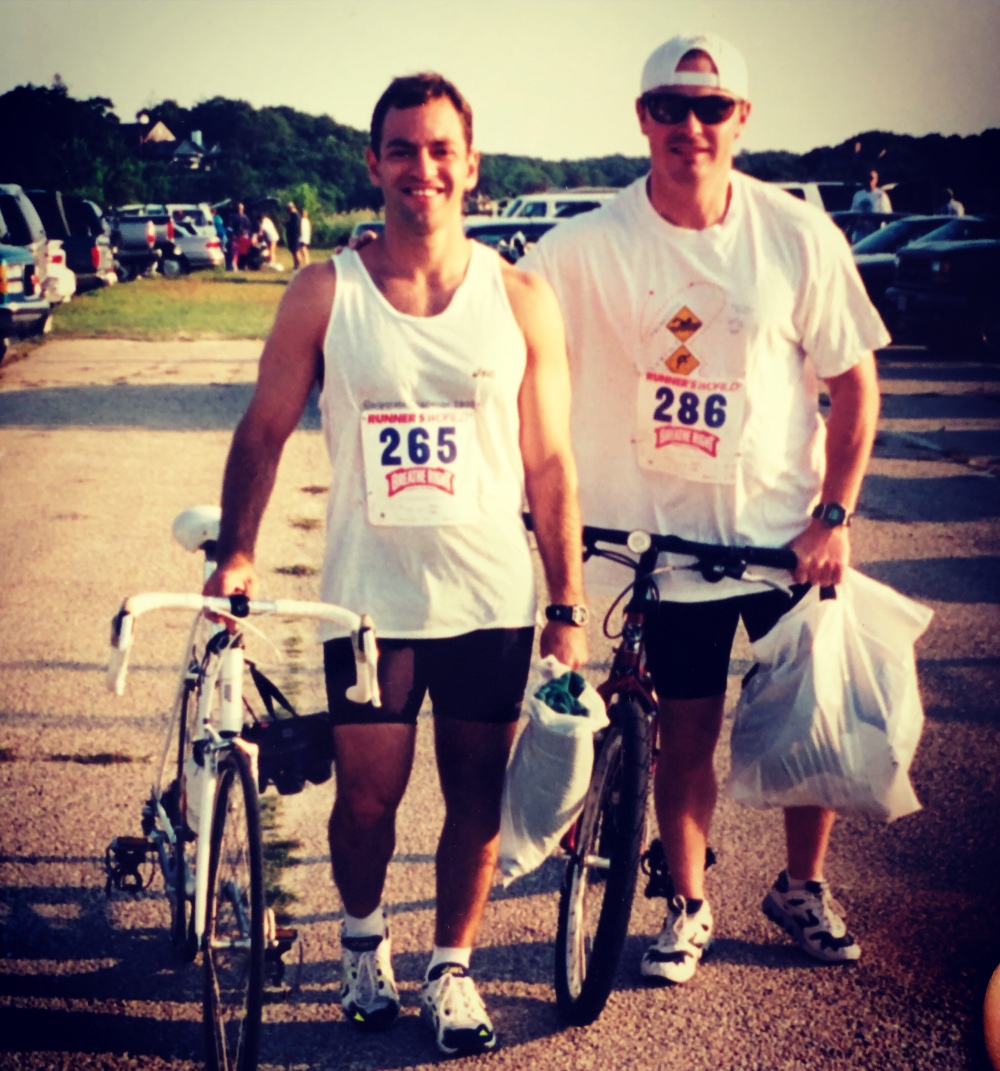 I couldn’t make my fingers work. I was utterly unable to thread my leather belt through the pant loops. There was plenty of space to do so; I kept checking, peering down at my waistband to confirm with my eyes what I felt with my shaking hands. Slipping my pair of cuff links through my shirt’s cuffs suddenly seemed impossible. These are the only pair of cuff links I have ever owned. Normally I can pick them out of the bottom of my overstuffed shaving kit in the pitch black of a darkened hotel room with which I am totally unfamiliar, just by their feel. Normally I can slip them into place with a quick twist of the wrist in a matter of seconds, absentmindedly, while reaching for another sip of coffee or maybe tracking down my tie’s location on the bureau. But nothing was working. Nothing felt even remotely normal. Fumbling and confused, I began to lose track of time. Repeatedly  glancing at my watch, uncertain whether 10 seconds or 10 minutes had elapsed since last check. I forgot to breath, hearing myself inhale, but not detecting an exhale. Reminding myself to let that breath out and to take another.

It occurs to me just now, two days later, that my dear friend of 32 years likely experienced this same disorienting sequence of events. This same taken-for-granted routine that suddenly seemed completely foreign and physically impossible. Somewhere early on his battle with ALS, I bet this happened to him.  It occurs to me now, too, given Steve’s delicious sense of humor, that he may have even choreographed my morning’s fumble-fingeredness. “See, you bastard? It’s hard isn’t it? What the hell’s the matter with you?” He would be giggling at me (not with me), maybe even throwing his head back on the way back and grabbing his knees as he folded forward in the opposite direction. Repeating this maneuver, his face reddening and the veins in his forehead popping, each time I dropped an uncooperative cufflink to the carpet cursing. Steve is laughing  uncontrollably. I think that is the only way Steve laughed. Uncontrollably. The man understood the purpose of laughter. The immeasurable value of a laugh.

I’d give anything to see him, to hear him, laugh uncontrollably again. But two days ago I was performing this unintentionally comedic Cufflink and Beltloop Slapstick Routine while getting ready for Steve’s funeral. So how much I would give—everything, of course, all of it—just didn’t matter.

There is something, I suppose, that I have to give. But Steve would never accept this gift from me, since it was his gift to me: A treasure trove of savored mental snapshots, spanning more than three decades, in which Steve is laughing as if he has never laughed before. Beginning when he as a college freshman, gamely enduring our stupid pledge pranks—one of which found me unintentionally scalding his hand in a bathroom sink. His response? A quick gasp of pain then an unmistakable giggle (and pledges were definitely not supposed to be giggling in this moment). In the last months of his life, Steve is even reduced to drooling and choking in a way that made me worry that I might kill him if I pushed this particular off-color joke any further. I’d glance at his wife Shara for reassurance, expecting that she would raise her hand, ask me to stop, “No more laughter, it’s not funny, you’re killing him.” She never raised her hand. She never even looked at me. Her eyes glowing in Steve’s shuddering joy, she took pleasure in these ecstatic bouts of hysteria as if she too had never seen or heard Steve laugh before. I was reminded again that this is what laughter is supposed to look like. It seems to be practically threatening his ongoing existence, and there he is showing us what laughter is supposed to look like. Like this.

I would leave our precious visits with Steve over the last couple years totally exhausted. Gutted. Unable to drive. Clutching the dashboard to regain my composure. Grateful that I had managed to make him laugh again, no matter how deeply I reached into an uncomfortable bag full of gallows humor. No matter how much it pained me to see his body withering, knowing that his mind was trapped inside. Aware that this may have been the last time I would ever get to see him again. The last time I would bear witness to his infectious giggle. To be infected by it. That laugh told me that even as his body slowly and cruelly abandoned him, he was still in there. Steve was in there. As long as I could make him laugh, later only capturing a fleeting glimmer in his eyes, he was still here.

I would give anything for that laugh. Always. Well before he calmly announced his awful diagnosis. But especially since that phone conversation two years ago that left me doubled over in my kitchen, unable to breath.  I would do anything. I would happily make myself the butt of our jokes. Happily revel with him in some long-passed incident revealing me as a total jackass.

And as one example, I’d be happily knocked down a peg or three in the gravel parking lot following a Cape Code triathlon 20-some years ago in which Steve has whipped me without even trying. That famous gap-toothed smile, he chuckles with his back rounded forward a bit, knowing that I had been obsessively training for months. Steve casually borrowed a bike, and  I think he even only swam the breaststroke our there, and yet he thrashed me. I wouldn’t be surprised if his bike tires were half-flat. He could crush me riding on the rims, sparks flying as he flew past me. I’m signed up for another triathlon this summer in Boston. I haven’t done one on the east coast since the one Steve and I did together.

That race now brings with it a great deal more meaning. Steve won’t be there, not physically. But I will picture him in my mindseye so clearly, standing on the beach before the swim, making me self-conscious about the obligatory (for me) Speedo. Probably I will hear him ask me (for the 100th time), “Sheesh, are you still shaving your legs?” And I’ll hear him when he passes me, politely but firmly, and if I’m being totally honest, I’ll tell him “Fuck off,” as I notice him double my bike’s rate of speed and realize that his bike tires are nearly flat but it doesn’t matter. I huff and puff, cursing him. I won’t even bother to imagine seeing him on the run, because I wouldn’t in real life either. But I will imagine him at the finish line. He will have long-since stopped sweating. But he won’t gloat. He’ll nod with understanding when I complain about my rented bike or my lack of sleep or how the on course race drink made me feel sick. And by the time we hit the gravel parking lot, walking our bikes back to our cars to be racked for another day, I will have regained my composure by then. Resumed my role as Steve’s Off-Color Court Jester. Working harder for his laugh than for the new race t-shirt I grabbed at the finish line or whatever participant medal dangles from my neck.

At some point, I will remind myself that Steve is gone. He wasn’t actually in this race. He didn’t actually call attention to my Speedo. He didn’t really blow by me on a bike with its chain rusted red. But I’ll hear that laugh. I’ll always hear that laugh. And in that moment, he will be right there next to me. His gift to me. Love you buddy.