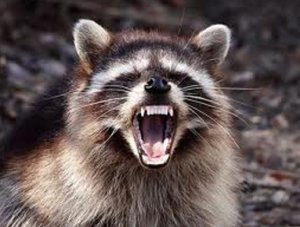 Or at least I thought he was.  Now I am not so sure.

Look, this is city living, I get it.  We have them in our backyard, though I’ve never actually seen them there with mine own eyes.  Our dog goes wild, on occasion, and bolts out to chase after something.  Or somethings.  I would like to think Wailea’s rabid dog routine keeps the critters at bay.  I also see them slinking around the neighborhood, hopping from curb to street, typically when all of our plastic Recology bins are lined up ready for their contents to be composted, recycled or land-filled. I’m OK with this, too.  Hey, they’ve got to eat, right?  They’ve got to feed their little critter families. That’s almost cute, if you think about it.  Like a gaggle of Disney characters.

But I’m far less OK with what I experienced this morning. I was shuffling across the Marina Green with my neighborhood buddies to hop in the Bay for a swim.  As we approached the water’s edge in the pre-dawn light, I spied an arch-backed lemur poised and staring.  He or she stood right at the top of the steps we use to slip into the Bay, unmoving.  He or she looked, well, pissed.  They’re supposed to run, right?  I heard myself say aloud, “So, what are we supposed to do now?  Run serpentine?  Play dead?  Stand up straight, puff out our chests and look big?”

One of my friends stopped short and cut a comically wide line around the piqued raccoon (not a lemur at all).  He reminded me that a woman and her dog had been “mauled” a few months ago in a local park a couple blocks from where we live.  This seemed silly to me, but then I looked back at the raccoon and saw that he or she hadn’t blinked or budged.  And I think he might even have bared his teeth.  My friend maintained eye contact with the beast as he continued his cautious tiptoed routine.  Alas, we are on a tight timeline here, things to do today.  We did not budget time for a Mexican standoff with the local fauna.

If our wetsuits were better made, I’d feel good about our chances in an attempted mauling.  But given the number of times I’ve inadvertently pushed my own fingernail through the cheaply-made neoprene, I doubt very much that these suits are raccoon-proof.  Not even racoon-resistant, really.  And while I could fault the manufacturer for poor workmanship when it comes to degraded necklines and armpits, I don’t think my complaints about being ripped to shreds by a raccoon would be well-received.

In the midst of the parade of horribles twisting in my mind, fortunately for us, several other racoons join our nemesis at the top step.  The happy little family scampers off, suddenly Disney-like again.  We follow their movements until we know for sure they are gone.  It would be very awkward to find ourselves pinned down on the slick cobblestone staircase at the water’s edge by these little bastards.  Too shallow to dive in.  And too expensive to call in a Coast Guard chopper rescue.  Plus the chopper rescue would likely be captured by a local news crew.  And I don’t think we could stand the embarrassment.  Still, it would be better than being gnawed to death by a family of cuddly raccoons.  While I’m calculating the math involved with a helicopter rescue bill split three ways, we descend the steps and slide into the Bay.

I float on my back, nervously sculling with my hands pulling away from the staircase on shore, my neck craned back towards land, eyes darting around to confirm the coast is, literally, clear. Trying to remember, too, whether raccoons hate the water or love the water.  And if the latter, how fast can they swim?  And do I even know how to swim “serpentine,” assuming that is what is called for?

We manage to get off a great swim, though admittedly I swung wide, well away from hugging the shore.  Willing to be subject to the current’s vagaries rather than feed a family of rodents.  Ultimately, we survived the encounter.  Until we meet again this Friday….

I haven’t been in San Francisco Bay for almost two weeks.  That’s unusual, and I have been itchy about it.  Particularly since the Bay doesn’t really care about our indices of the Spring season.  Totally oblivious to the Vernal Equinox when day and night balance and the sun crosses the celestial equator nine days from today.   Couldn’t care less about Little League Opening Day.  San Francisco Bay remains chilly, and if you aspire to swim out there year round, it can be a bit risky to fall out of a twice-weekly swim routine.  It’s easy to lose the cold tolerance, I think.

Fortunately, one of my neighborhood swim buddies was up for a pre-dawn swim this morning.  This despite the fact that it sounds like he anticipates enjoying a fun-filled root canal procedure later today.  It is admittedly peculiar that someone would pop out of bed an hour early to swim in the freezing Bay before the sun comes up; clutching his jaw in pain right up until it’s time to dive into the chop and get wet.  But it didn’t seem peculiar to me at all at the time, and probably not to him either.  Nor to the half-dozen other swimmers we criss-crossed–all of whom swam bareback–likely suffering from all manner of aches and pains that must be ignored and suppressed in the name of our shared addiction to icy water.  As I’ve written before, the whole thing is admittedly off-piste.

And this morning, I was reminded why I keep going back.

Unlike a temperature-controlled, black-lined pool, the Bay is ever-changing.  I think I’ve waded out into Aquatic Park a few hundred times over the years, and every swim is different.  There is something mystical about my first glimpse of the conditions, revealed only faintly in the pre-dawn light, or lack thereof.  Otherwise familiar landmarks (watermarks?) take on different forms.  For a split second, a cigarette buoy that I have known for 15 years looked exactly like that iconic Loch Ness Monster photo.  You know the one.  It’s the image we all think of when you read the words, “Loch Ness Monster.”  But just to make sure we’re on the same page, it’s this image — 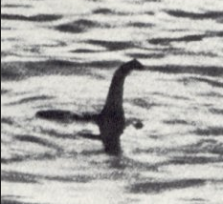 So for a brief moment, I thought the buoy pictured below might be Nessie —

And my neighborhood swim buddy agreed, though the pain in his jaw may well have been impairing his judgment.  My judgment wasn’t impaired, just cut loose a little bit, intentionally suspended.  I like to conjure up a little manufactured magic to make the swim that much more interesting.

Turns out I didn’t need to do much conjuring this morning.  The conditions were bizarre, the choppiest I have ever experienced out there.  Unfortunately, the photo at the top of this post, taken after we finished, simply doesn’t do justice to what went on out there.  The combination of general swell energy in the Pacific right now, a high tide reaching about 5 feet, and winds gusting up to 18 knots overnight and into the morning made for blustery, open ocean conditions.  I was reminded of the very sketchy conditions in the swim portion of the inaugural Ironman Utah twelve years ago.  Those conditions took a man’s life that day, so I know not to be cavalier about this kind of thing.  A morning unlike any other I can remember in Aquatic Park.

And I loved every second of it.

We made a point of swimming in unusually close proximity to one another.  It would be easy to lose contact bobbing between 3-foot swells.  It took forever to make our way out to the “opening” where Aquatic Park opens up to the Bay proper, as I think of it.  Twice, I popped up when other swimmers suddenly appeared right in front of me, obscured by the waves until they were only a stroke or two ahead of me.  Always a little unnerving when this happens, given the food chain issues around here.  The leg back to shore was much faster.  We practically body-surfed our way back to the beach.

We stumbled out numb, less than 30 minutes later, and turned around to look back out at the Bay.  I expected to see Nessie again, crashing waves, and “Victory at Sea” conditions.  But no, just the relatively placid morning captured in the photo at the top of this post.

Had I imagined the whole thing?  I don’t think so, but it really doesn’t matter.  This is one I’ll remember for a long time.