We’re something on the order of 18-20 years into this. Maybe more maybe less. Same deal with Satchel Paige’s true age. I don’t think anyone really knew. A number of close college buddies of my wife and mine rented a ski house in Vermont many (too many) winters ago. No kids yet, which is impossible to imagine now. So to fill our time more creatively than just the usual 20s-ish self-absorbed behavior, we were heavy into oddball pranks. (Still are, or at least am). One of the gents in this ski house crew, let’s call him “Frank,” stopped at a novelty store on his way up to Vermont from NYC. Spencer’s Gifts. Oh how I miss that place and it’s aisle 3 of forbidden fruit, but I digress. It wouldn’t have been good enough for “Frank” just to pick up a whoopie cushion or fake vomit or pretend poopie. Instead, he eyeballed a merchandising prop that was decidedly not for sale, and somehow managed to convince the teenaged store clerk that the prop should leave the store with Frank. “How much for the Alien Head?” A crumpled five dollar bill exchanged owners and the rest is history.

I don’t remember how the idea was born in that Vermont ski house that weekend, but the Alien Head has played a central role in our group’s lives ever since. The game is simple enough to explain, in a handful of previously-undocumented rules that I will now officially document —

1. Do not get stuck with the Alien Head in your possession. Ever. Never.

2. Do stick said Alien Head with someone else, unbeknownst to them, to be discovered and completely unwelcome by the oblivious recipient.

3. The Alien Head “transfer” must be creative, i.e., it cannot simply be Fedexed on down the line. Creative transfers become part of the legend, part of the multi-decade narrative that we are weaving together.

4. The true Alien Head Game Master will absolutely resist the urge to boast about or point out immediately or even ever for that matter, the fact that he or she has just handed off the Alien Head to its next owner. I struggle with this particular rule mightily. Probably some offshoot of my instant gratification character flaw (which Stanford points to in saying I’m screwed). And I admire my fellow game players who are able to say nothing, literally nothing, for years in some cases, about the fact that they genuisly (not a word, but it fits here) hid the Alien Head in the zipped up spare tire cover bolted in the cargo bay of our old Jeep.

To these 4 basic rules regarding which I suspect all of our group members would easily agree, I’d like to propose a new one:

The Alien Head has kept our group of best friends bonded together, as we’ve gotten older, moved together then far apart, survived Cancer scares, shared our innermost secret fears about life, helped each other navigate the inevitable bumps in the winding road of marital bliss, and raised our own children. I’m breaking one or two rules here, but on Thanksgiving, I saw the Alien Head. With mine own eyes. I don’t think I’d seen him for a couple years. He looked like shit. The scrapes on his skull, new to me but likely a couple years old, betrayed the unreasonably small suitcases he’d been hurriedly jammed into on trips to one airport or another. And given how prominently he was displayed in his hosts’ home, I knew that his hosts, let’s call them “Val and Dave,” would do just about anything to hand him off to me and my family before the night was through. I might argue that such a prominent display is also against the rules, but that would distract from my big picture point coming up.

As dinner progressed and darkness fell, I sent my son Max on a quiet, secret mission to go search our car and make sure that the Alien Head had not yet been bestowed to us. Giddy, he found it, and brought it back inside. I scanned the faces of Dave and Val first, then seeing no hint of mischief, brought my accusatory gaze to their youngest daughter. The look of conspiracy flashed in a blush across her face; she was obviously in on it. Part of the Alien Head Game. And it was then that I realized that the Game needed to be played by a larger number of players, the next generation of our group. I hope that the Alien Head will connect them across time zones, ups and downs, and serve as a reminder of good times, just as it has for our group of best friends who are now 20 years older than when the Alien Head first came into our lives.

PS there is a “boys weekend” coming up very shortly, when “Frank,” “Dave, (let’s call him) “Alex” and I will all be in the same time zone for the first time in too long. The Alien Head Game figures to be a hot one. Wish me luck. 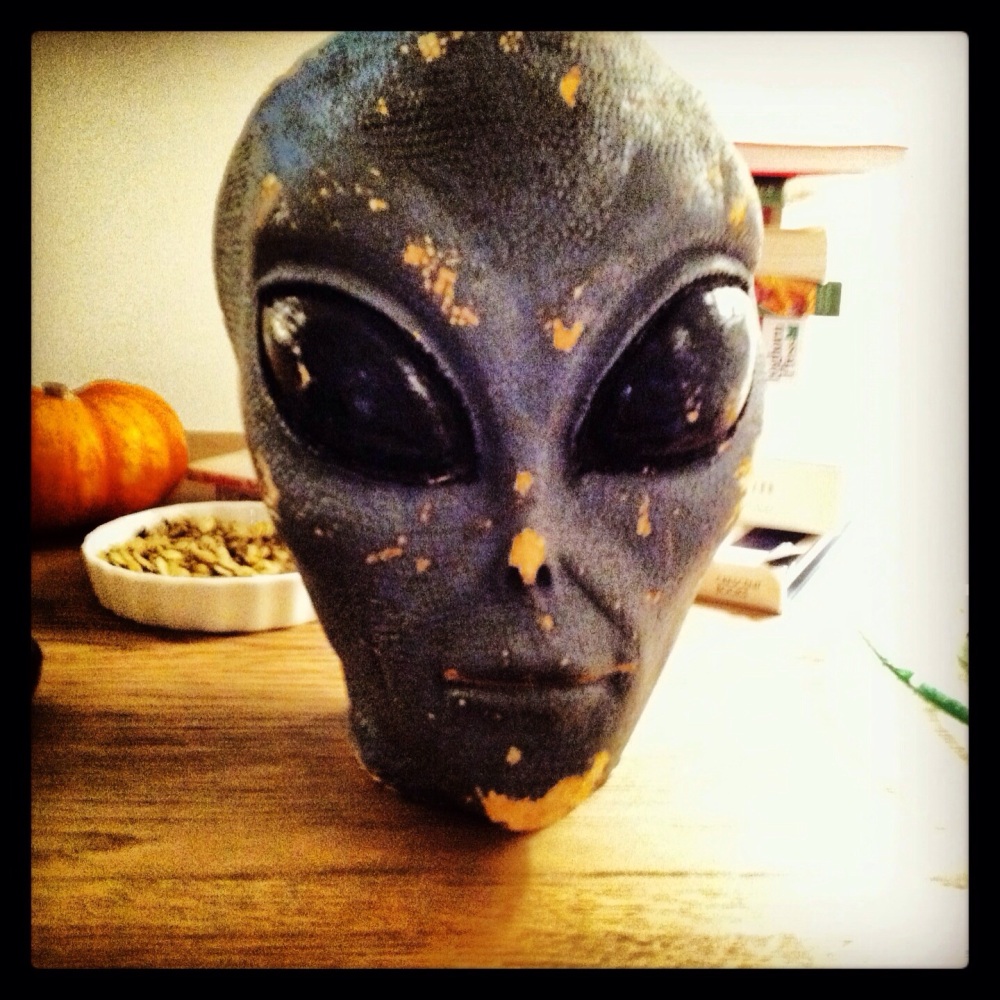