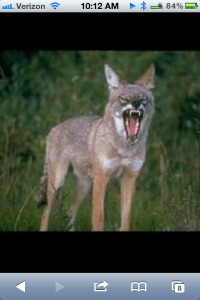 Modern, enlightened parent that I (think I) am, I still have a few hot button issues that I am unabashedly attempting to install into my sons’ operating systems.  Of their heads, not their iThings.  I am willing to endure the exaggerated eye rolls and plaintive “Ohhh Daaaads” to make my point on something that I consider truly important. As in, life and death important.  Repetition is my friend in these matters.  But an exciting event is my best friend in these matters.

San Francisco has a major problem with crosswalks.  More specifically, with how pedestrians treat crosswalks. As if those two parallel, white lines can protect whoever walks between them from anything that might do them harm.  Typically, a couple tons of steel, glass, rubber, and plastic.  Hence the sarcastic moniker, “Magic Paint.”

I have my boys trained (I know how that sounds, but I’m OK with that in this case) so that when they witness an oblivious (but not impervious) pedestrian strolling through a crosswalk in the face of menacing traffic, they shout out “Magic Paint!”  Not in a threatening way, and probably not loud enough for the iWalker with his iFace glued to his iPhone to even iHear the call out.  But loud enough to make my inner Great Santini feel relieved that this is one lesson that just might stick.  So San Francisco crosswalkers — if you hear some sarcastic kids yell out “Magic Paint!” in your direction, please don’t take it personally.  It’s due to an overzealous parent hard at work. Repetition.

It’s even easier for the Magic Paint lesson to settle into the Hippocampus — or is it Cortex? I’m shooting for the both — if some sort of stimulating/dangerous/Jackass the Movie-ish event presents itself.  Now, picture me with a tight, librarian smile (no teeth showing), eyebrows raised, hands delicately crossed with palm edges pressed to the table.  This is my preferred posture when seizing on a “teachable moment.”  And class is in session….

A couple months ago, I was wheeling through the Presidio with a Prius full of carpool kids, my own and a family friend’s.  We came to a stop a few feet away from a fairly new crosswalk.  The crosswalk was empty, like “Soylent Green” empty, I mean deserted, so I let my foot off the brake and the car slid forward.  At that moment, a nice young woman launched herself into the crosswalk, iPhone stuck to her ear in full conversation.  No glance up to check for heavy machinery.  Ahh, Magic Paint.  I stomp on the brakes, lurching a bit. Well, aside from motor vehicles, the Magic Paint also fails to prevent death by coyote attack. At the other end of said crosswalk stood a mature coyote, hackles up, teeth bared, staring directly at our nice young woman.  Our nice young woman was walking directly towards him (or her), completely oblivious.  So I politely honked my little horn as she began to pass in front of our bumper, figuring this would wake her up to her impending evisceration.  I heard her say into her iPhone, without looking up at me, “Nothing, it’s just some a#*hole honking at me in the crosswalk.” I gripped the steering wheel a bit harder rather than revv the engine (my preferred choice 20 years ago).

She was moving closer to the coyote with every step, and the coyote was not backing down, looking increasingly agitated and probably feeling threatened.  From years of coaching grade schoolers in loud gyms and broad fields, I have developed a refined, eardrum-piercing, two-fingered whistle.  I mean, it’s loud.  And it was my last resort.  “Thaaaweeeet!” out my lowered window.  The carpool kids all instinctively reached for and covered their ears, albeit too late. The nice young woman stopped in her tracks and looked at me with a very angry face, appalled that I would dare disturb her so rudely as she glided along within her Magic Paint.  The coyote’s knees flexed at the whistle, then she (or he) instinctively lowered to the sidewalk a bit and sprung the hell out of there at a full sprint. I actually am not sure that the nice young woman ever even saw the coyote, and perhaps that nice young woman is blogging somewhere about the a$#hole driver who honked and whistled at her in a Presidio crosswalk. But the kids in the car totally got the Magic Paint message that afternoon.  So I’m Ok with that.

PS for regular The Lemonade Chronicles readers, San Francisco Bay was 51.1 degrees this dark and foggy morning, I turned off 10 lights in our house (yes, I counted) after my boys had bounded out for the bus stop (yes, on time), and no, I do not believe that Siri could also have saved that nice young woman from being “et”. 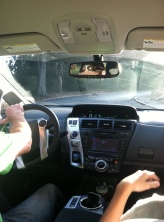