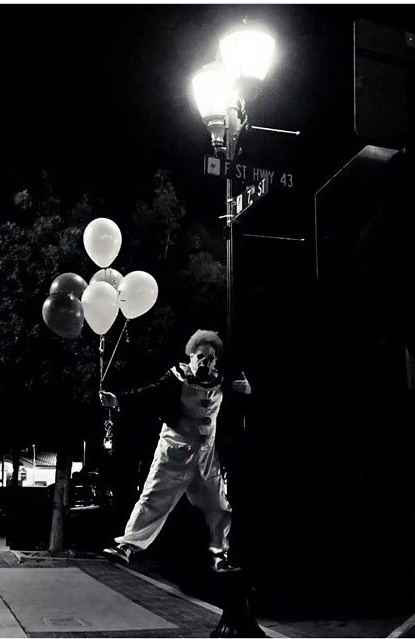 The Wasco Clown is right in my wheelhouse. I rush to Instagram every morning hoping against hope that he or she has or they have posted something creepy from his or her or their overnight exploits. This spooky clown is in my head; it’s as if the clown is looking directly and only at me in these quietly disturbing photos.

I have long been a huge fan of Halloween and all that it entails. In grade school, my dad and I used to rig up a pumpkin-headed dummy on our front porch, raising the dummy’s skeleton hand via a fishing line pulley system when an unsuspecting trick-or-treater approached. Great results.

As I got a bit older, I would dress as a dummy myself, oversized shirt and pants stuffed with pillow innards, a nondescript mask covering my face. I would position myself limbs akimbo on the stairs leading to the skeleton-handed pumpkin. They would assess me on the way up the stairs, deciding I was indeed not real as they moved along up to the main attraction. They breathed a sigh of relief, maybe a small chuckle at the pedestrian skeleton hand with fishing line act on the porch. Their guard officially down, I would jump out at them on their way back down the stairs. Scared the bejesus out of them, without fail.

I made the annual pilgrimage to Syracuse’s JCC Haunted House with my wide-eyed school chums. The haunted house antics were only slightly more effective than my own, popping out at my buddies in one pitch black hallway or another.

I would never go to a haunted house with me. To this day, I don’t know why my friends agreed to go every year. And I’m surprised no one’s heart exploded along the way. Also surprised these friends of mine are still friends of mine, unfairly and repeatedly terrorized as they were.

As an “adult,” I’ve passed the Halloween Bug on to my boys, I think. They strategize about their costumes year-round. With a sense of pride, I rebuff their first choices — invariably one movie sequel horror killer guy or another. I don’t even know how they know who Freddy Kruger is.

We set up a green spotlit graveyard on our front walk. Three hanging ghouls have blinking red lights for eyeballs. Yesterday I bought some upside down hanging bat lanterns for our little inside patio. They look good surrounded by the dark purple string lights. That patio comes alive when the sun goes down.

Over the years, the boys have assembled piece-by-piece a little, automated Halloween Town on a table in our dining room. An overhead witch chasing a WW II-era girl around and around a circular graveyard. The Witches Brew Pub with its faux-neon sign and red-eyed monster waiting under the porch. A merry go ’round carnival swing chocked full of seated skeletons clutching the swing’s chains in their bony fingers.

It’s all very mesmerizing. At least to me.

Which is why I am agog at the Wasco Clown phenomenon. The clown apparently wanders around a Bakersfield-area town in the middle of the night, taking vaguely menacing photos of himself in familiar locales, posting them on Instagram later. He doesn’t bother with dramatic or threatening poses, he is just…there. Dead-eyed. Flat.

Allowing you, me, to project our own innermost fears onto him. He’s even added the brilliant stroke of clutching a gaggle of balloons in his right hand. So many things in these photos that appeal to a Halloween-ophile such as I. I stare at the photos as if I were examining a painterly van Gogh. Admiring this element or that one — the choice of mask or face paint, the odd contrapposto standing in the dewey grass of a children’s playground. The Michael Myers tilt of the head.

So touché, Wasco Clown. My Halloween karma has come home to roost. You have officially scared the bejesus out of me. Keep up the good work!